The first two Broken Sword games were awesome. Then came a horrible 3D graphics phase with 3&4. Now #5 has switched back to the beautiful hand-drawn backgrounds with more subtle 3D characters rendered on top of them. This works much better. As usual there are the two protagonists with a large cast of side characters. The whole thing is very well produced and looks good. 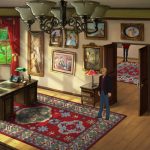 Once again a very linear story with little (no?) branching.

Some of these puzzles are a bit contrived.

I stopped playing this game for about three months because I got stuck in the cave in the chapel and couldn’t figure out the symbol puzzle. I finally broke down and just used the in-game hints. I guess it makes sense but this puzzle was frustrating. The user interface for the puzzle itself was cumbersome – there was no way to remove the little word strips from the symbols once you placed them so they kind of were distracting and actually covered each other up in some cases. The symbols were eventually comprehensible but it turned into a lot of trial and error and as I said I never did solve it.

This game is so slow… walking around everywhere is time consuming and boring.

As with the other games this one has a lot of history, mythology, religion and philosophy wrapped up in the plot. It felt like an Indiana Jones episode. This was all good. The problem is that it just turned into a long slog towards the end and it was a relief to be finally finished with it.