Posts about my research project into classic adventure games.

This game is a thorough pain in the ass. Puzzles hinge on finding tiny little visual attributes of characters and mousing over them. The sleazy guy in the Library has a banana behind his ear. Or a 6 pixel smudge which look like hair … whatever. Anyway you better click on that because it holds the secret to the whole first half of the game. Same thing with the lady getting her haircut… you better mouse over every fucking pixel in her body to realize that she has a hair curler in her hair. And if you didn’t notice well… just wander forever with no clue how to proceed. These are bad puzzles and there’s a lot of them.

Well after bashing my head into this one for a week I’m moving on. Tedious pixel-hunting, puzzles which require trying every inventory item with every on-screen item (stick the frog in the drunk’s mouth… OK), and honestly for all its reputation as being hilarious I’m just not sold on the humor. It did grow on me and I was enjoying the brief moments of progress where I was figuring things out using logic but overall… Jesus make it stop.

The Secret Of Monkey Island II

This game is bigger than the original. I like the “redone” look much better in this game than the first. Guybrush looks less creepy and the various other characters look a little better although still somewhat Disney-fied. I played the whole game in the new style.

The puzzle at the end of the first part with the monocle / Captain Dread was impossible for me to figure out and the internal hint system just kept telling me to go talk to Captain Dread. I had to look up the answer on the internet.

I am currently in the situation where I know some things I need to do but I don’t know what I’m supposed to do to get it done. I have a whole pile of shit in my inventory and I can travel to three islands but I’m basically stuck and I’m just wandering around trying shit at random.

I retrieved the book from the Governor’s bed but I just took it to the library and gave it to the librarian because I thought maybe she would say something and she just took it. Now I can’t get it back and I think it contained something important. I read it once but it wasn’t very clear what I was supposed to learn from it. Now I’m getting that ‘I wonder if the game has a bug feeling.’

I cut off the pirate’s peg leg and then didn’t realize that this meant the woodworker would go to help him. This was particularly unclear because you don’t see the woodworker walk over there even though he would have to pass right by you on his way. So I never got the hammer and nails without looking at hints.

Argh. Seriously for all the polish on this game there are some really frustrating hard edges. I’ve been doing shit just because I figured out I can but I have no reason why… For example I can get drinks at the bar and mix them to make different colors but I don’t know what that will be used for. I got near-grog by getting the envelope when I got Kate out of jail but I don’t know why. So I’m just wandering around trying them on everyone.

Fuck me. I knew after I got these ashes I probably needed to do some VooDoo shit so I went to the VooDoo lady and she just said the same old shit about the VooDoo doll. So I went to the library and checked the catalog for VooDoo spells and checked out a book on it and it said nothing interesting. I even took that book back to the VooDoo lady and she still said nothing about it – I couldn’t even give it to her. So I figured, nope, that’s not it. Well it turns out I didn’t go through all the jars in her front room one by one and find the resurrection potion. Which is fucking annoying because everything else in the game is like one big hit box but these jars are tiny little separate items – but all named “Jar” until you actually click to look at them. So just mousing over it looks like just one big item. Fuck that. So once I clicked on the right jar the lady calls me back and now she wants the book. Grrrr…

Had to use hints again to figure out the spitting contest. I had all the drinks with me and I had already tried mixing them but after doing a few and tasting them I figured they all just said the same thing and that I would find some kind of clue in the game telling me how to use them. No… no clues in the game… you just need to try to mix every combination and then taste the result. If I had randomly mixed yellow and blue I would have tasted the green and figured it out. What’s annoying again is that I had discovered all the pieces but without exhaustively trying all combinations I missed the solution. Instead I walked around all three islands trying to see if someone would say something about the three drink colors. The three pirates for example… no. The three pipes which feed the governor… no. The bartender makes no comment about it. Can’t hand them out at the party… all logical possibilities. Constantly getting the ‘That doesn’t seem to work there’ message.  Annoying.

This ‘I can’t get there’ shit about the cottage on the little island is pissing me off. Captain Dread should drop me off there! Why can I just tell him to float his boat over to the beach?

OK the puzzle with the cottage was frustrating as shit because it’s a timed exercise where every failed attempt means a 30 second delay walking up the path, into the cottage and reading the same intro dialogue. That got old quick. Also the scroll wheel on my mouse stopped working every time at the crucial moment when I quickly had to try another thing to try from my inventory. WTF.

Pushing the right brick – again with the hit boxes and no indication that there are separate bricks vs one big clickable wall of bricks.

Woody got kidnapped. Let’s look for clues. Sorry, no clues exist. Just wander around every single location in the game until you stumble on a shipping crate in the swamp.

This game really goes off the rails at the end. How-the-fuck-are-we-going-to-end-this-fuckit-lets-make-it-all-a-big-joke ending. Big letdown. What about Elaine? Was that tied up and I just missed it? I don’t think it was ever tied up. Plus the last piece of the puzzle – giving Le Chuck the handkerchief for no reason… fucking stupid. At least have him sneezing or something to give some motivation for that action.

Honestly the puzzles for the most part were good but the few real stinkers and the problems with the interface kind of ruined it for me. The worst puzzles all seemed to have some real-time action element to them which was time-consuming to try again and again and was made cumbersome by the interface.

Holy shit this game gives not one fuck if you do stupid things which make the game un-winnable! Having just finished The Secret of Monkey Island this is a shock. Adventure will happily let you throw all your items in the river where they wash away forever.

The game map is confusing as hell. Go north, then go south. Guess what? You’re not where you started. Directions are really hard to figure. Unfortunately it turns out this is the main puzzle of the game – mapping.

Oh God these puzzles are arbitrary as fuck.  The dragon puzzle… the plover puzzle… the fucking endgame! Holy shit this game was not designed to be fair.

Classic. First of its kind! It’s like going back in time! Lots of references in other games originated here. Exploring the cave was pretty fun.

Too much emphasis on mapping. There is no story. Only some puzzles make sense, some are just completely arbitrary.

The Secret of Monkey Island

First game in my Epic Procrastination Adventure Game Research Project was The Secret of Monkey Island. It’s got a big reputation as one of the best of the old-school 2D verb/noun graphical adventure games and I’d never played it. Other games in this genre are things like Kings Quest, Space Quest, Peasant’s Quest, etc. 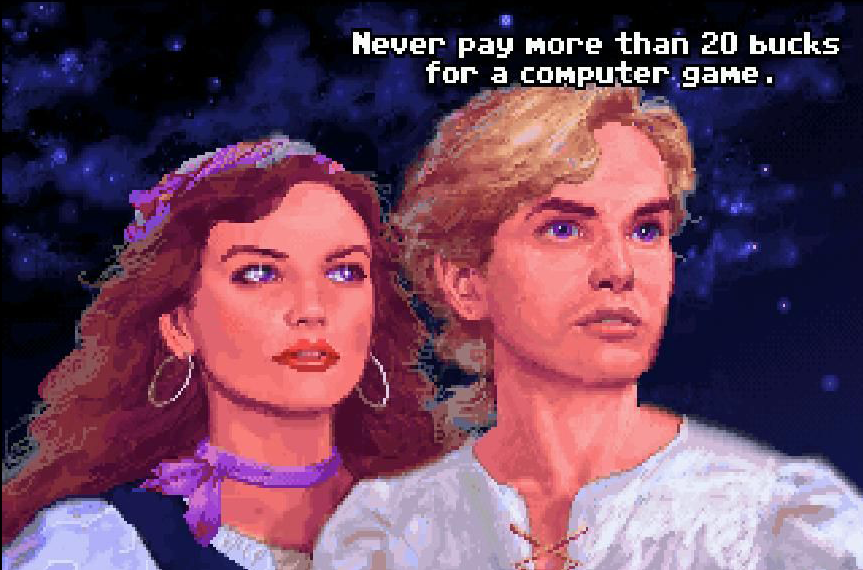 First off I bought the “enhanced” or whatever they call it remix of the original. I thought all the new graphics and voice-over really didn’t add anything to the game and I disliked the new interface. Not to mention your love interest is actually attractive in the original and looks like a horrible Disney character in the remake. I loved the fact that the original game was still there and could be instantly switched to just by hitting F10 at any time. So props for that – I played most of the game in the old-school 8-bit graphics style.

This game is definitely fun. Here is just a brief run-down of what I thought in positive and negative.

Awesome “feel”. The game had an engrossing style: The visuals (in the 8-bit version) and the dialogue bring you right into the world of Monkey Island.

Humor. The game has a strong voice and a distinct sense of humor. It plays off your expectations and consistently surprises and delights. Winning a “I defeated the Swordmaster” T-Shirt for example. This contrasts with a bloody corpse you’d find at the end of such a fight in other games.

Variation. The three parts of the game are very distinct and give you the feeling of actually being on a journey. The nighttime world of Melee Island is left behind for the bright daylight of the ship and Monkey Island. Likewise the underworld of the Ghost Ship is a sharp contrast to both.

Expanding World. Your access to hidden areas slowly and naturally expands in a gratifying way. I especially liked the fact that you could find oars for the rowboat and paddle around the perimeter of the Island.

Cannot Fail. I mean unless you quit – there is no way in this game to die or get stuck in a situation where you have to load a saved game or restart. This is really unusual in games of any kind but especially adventure games. I love it.

Some of the puzzles were arbitrary and confusing. Case in point is the catapult puzzle on Monkey Island. I swear I tried to pick up a rock from the Pile-O-Rocks and wasn’t able to. After that I never tried again and it took forever to figure out what to do.