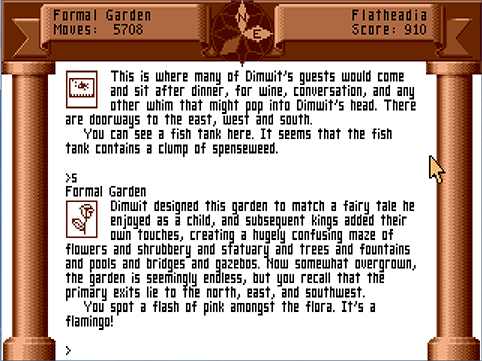 OK I don’t know if it’s because I just slammed a cup of coffee but this game has a killer opening. Immediately you are thrust into the action: shoved this way and that, pushed into the scullery and the kitchen and then back out to the castle dining hall where you witness Megaboz casting curses and blowing shit up. The King is Dead! … cue big giant title screen: ZORK ZERO. Plus it’s funny. I’m immediately psyched about this game.

The interface is better than any other text adventure game I remember playing. The map is really nice. The colorful borders which update based on your location are a nice addition and help make the game nicer to look at without being cheesy.

There aren’t many other characters in this game.

The plot is pretty thin so far. After the really great opening which felt like the beginning to an epic story it’s just been a lot of exploring and picking up tons of items with no idea what to use any of them for. Here’s a list of all the shit I’ve picked up at the current moment and have little or no idea what to do with:

A sceptre, a glove, a cloak, a metronome, a funny paper, a
ceramic perch, a dusty slate, a cannonball, a red clown nose,
a ceramic pigeon, a package, a ring of ineptitude, a scrap of
parchment, a bag, a worm, a scroll, a steel key and an iron
key, a memo, a drinking straw, four unique torches, a walnut, a toboggan, a screwdriver and a zorkmid coin…

The story, if there is going to be one, hasn’t really started yet.

I’m about halfway through now if the score is a good indicator. There is no “story” to this game. There is a very detailed world and a general scenario of collecting the Flathead’s items to overcome the curse but there is no plot or arc of any real kind. It’s just like the other Zork games now that I remember it (and just like Adventure in this respect). You wander around solving puzzles and getting items which you place somewhere to get points.

So here’s the problem I’m having currently. There are some things I did early on in the game (like feed the bar to the flamingo) which I didn’t get any points for and I probably shouldn’t have done but are irreversible at this point. So I am having this ‘mis-trust’ feeling where I think maybe the game is one which will let you screw yourself and not tell you until much later where you discover the game is un-winnable. I’ve also managed to dump out the contents of my cup and I definitely needed that. I think it happened when I fell down the shaft off the mountain but there was no message stating specifically that the cup was spilled so I don’t know. I’m so far along now that the thought of going back and re-doing things is daunting. Thus I’m losing interest in the game and thinking of using hints at the least or quitting at worst.

Yeah… fucking flamingo and the cup. I made it 95% of the way through the game and now I’m fucked because of that cup and the flamingo food bar. Pretty much the first thing I did in the game was feed that flamingo the food bar. Nothing happened and I was like… whatever I’m sure there was a reason to do that. Well there wasn’t and now after playing for five days I realize I’d have to re-play the entire game to rectify that one move. Fuck that shit. Sadly I won’t be seeing the end of this game.

This game was entertaining, I’ll give it that. It’s a puzzle game and the puzzles were clever and engrossing.  It was fun to see the world open up and solving the rebus felt like a real accomplishment. For the most part I never felt like I didn’t have some place to go explore and I never got too stuck for long. The UI and graphics added a lot to the text adventure and weren’t cheezy like in some of Infocom’s other attempts at using graphics.

This game has no story. It’s just like all the other Zorks where you find treasures and store them somewhere for points (and like Adventure as I mentioned above). There was a very detailed scenario and lots of back-story and history but the “plot” itself was paper-thin. Just find all this shit and throw it in the cauldron. The world is essentially static and your actions don’t change it the way being a real character in a story would.

The final problem I had that kept me from completing the game was a real drag. At the least they could have segmented the game so that once you get past certain checkpoints you definitely have everything you need to continue. This shit about fucking up on move 50 of a 5000 move game and then being expected to restart to fix it is bullshit. I don’t have time for that.

The huge number of objects in the game was a problem. Some of them never seemed to have any use but still for every problem I had to think about everything and imagine some way it might work. And since your inventory was limited sometimes I just lugged some items over to a problem area and tried them all and then restored if nothing worked.

Using the score as a feedback mechanism to tell the player what was “correct” or not is a little hokey.

Over use of the “feelies”. I’d like to play the game please, not read a huge pamphlet (although it was entertaining), searching for clues.

The world was almost totally vacant of people. There’s the Jester and a few side characters who talk to you a bit but for the most part you’re wandering around a ghost town. I felt this could have been improved.

At some point around 3/4 of the way in I got bored and it was more of a chore than a game. I think this cleared up once I got into the Oracle but still there were points where I was just slogging through to cap it off. Sadly I never saw the ending.

Anyway, I used to love Infocom games growing up and this was certainly not a bad gaming experience overall but I did find it taxing and annoying in parts.