Broken Sword 1: The Shadow of the Templars 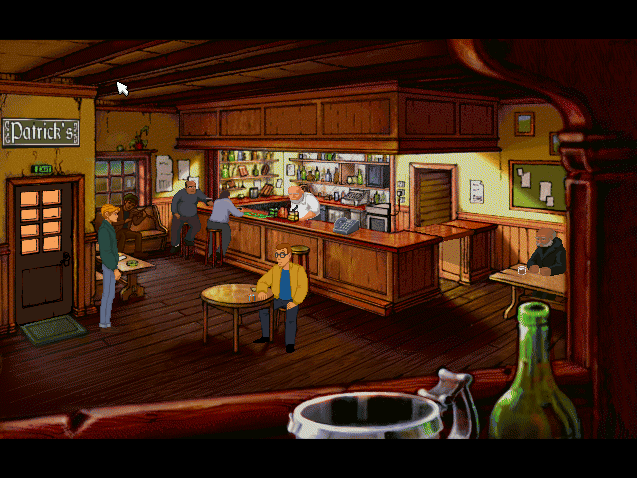 Immediately this game stands out for its unique graphical style. Smooth hand-drawn animations for all the characters and backgrounds and a seemingly endless supply of natural actions for all of them. The world seems very authentic because of this, more like watching an animated film than a video game. The artistic style is very beautiful as well – obviously a ton of work went into the visual design.

The dialogue is excellent. All the characters in the game have their own personality. From the gruff street worker to the randy British aristocrat, all the side characters feel well developed and authentic.

So far (early into the game) there are very few actual puzzles. Mostly its just a lot of working through all the dialog options with each of the other characters. More like reading a book than playing a game currently.

This game is very slow but it’s also very enjoyable. The puzzles are fairly simple although getting into the crypt in the castle was pretty convoluted. There are still some long sections where you just have to iterate through a dialogue tree with some character or another. It still feels like reading a book and less like playing a game at times. The story is pretty well done (especially the dialogue) although the plot is a bit overused.

The puzzle in the museum was fairly lame. I never found the window mechanism – didn’t do enough mouse roll-over hunting. Once that was found, the rest was easy. In fact too easy – Nico is apparently a Navy SEAL in addition to her job as an out of work photographer.

The puzzles in Syria and afterwards in the excavation dig and in Spain were very good. Difficult but not so much that I gave up.

This game is very well done. The story is well written and is a major part of the game, not just an afterthought. I do wish the scenario was less cliche but it’s well done nonetheless.

I like how this game forces you to solve a puzzle in a particular place and won’t let you leave until it’s completed. For example, once in Syria you can’t just hop on a plane back to France until the puzzle is complete. When you are working on the Excavation puzzle you can’t even leave and go back to the Paris map. This removes the uncertainty that you don’t have all the required items to solve the puzzle and forces you to concentrate on what is there. In other games which don’t do this it’s too easy to have lots of open puzzles lying around with no reason to focus on any of them.

The ending was just OK – puzzles were fairly simplistic.

The love interest angle of this story could have been dropped entirely. Nico was just annoying and never did anything which would have made George fall in love with her. But there he is at the end talking about ‘the girl i love’. Other than that the story was well done.

This game was unusual – great graphics, slow pace, good story (mostly) and good dialogue. There were really only a few solid puzzles though. Most of the time things came easily by just trying some obvious inventory items.

The puzzles were tightly integrated into the story and the plot. I never once felt that I was taking actions that the character himself wouldn’t have done or wanted to do. Nor was I prohibited unreasonably from doing things which I would have wanted to try.

It was only possible to get killed in situations where it was very obvious that George was in real danger. This let me save games before hand and not feel blind-sided by random deaths.

There was no way to get ‘stuck’ (like in Zork Zero and many others) where the game lets you do something which later keeps you from winning the game.

There were people in this game! Lots of secondary characters with lots of authentic dialogue and believable actions. This is so much better than many adventure games where you feel like you’re living in a depopulated wasteland.

Although there were a few annoying ‘pixel-hunting’ puzzles they weren’t show stoppers.

The story was good – outside of the love interest angle – and the dialogue was really top notch.

I really liked how you would be restricted to small parts of the game once you had entered them and couldn’t even leave until you had solved the puzzle at hand. This reduced the normal frustrations where you always have a lingering feeling that maybe there is some item from another part of the game which is needed to progress. So you wander aimlessly looking everywhere for shit instead of focusing on the details of the current situation.

As mentioned above this game was very slow and the extensive dialogue trees felt like I was reading a novel at times and not playing a game.

Only a few of the puzzles were really difficult. Most were solved easily once I had explored the available area and picked up the right pieces.